Apples to Apples is a multiple award-winning card game that will light up any party or game night. The game was invented by Matthew Kirby in the late 90s and Out of the Box Publishing acquired its license from him shortly thereafter. To date, Apples to Apples is their best-known game.

There are two decks of cards in this game; one red and the other green. The cards in the red deck have nouns and the ones in the green deck have descriptions, or adjectives. The primary goal is to select the description, or green card that best matches the noun on the red card.

Card Against Humanity’s core principles are similar to those of Apples to Apples. The game features one Black Card that everyone has to try and match. Each player is given a set of White Cards to match the Black ones, after which a judge chooses the player who made the best match.
So, Apples to Apples vs Cards Against Humanity: which game offers more fun? Well, by the end of this review, we will have an answer to this question. We will also discuss how to play each of the games and the main differences between them. 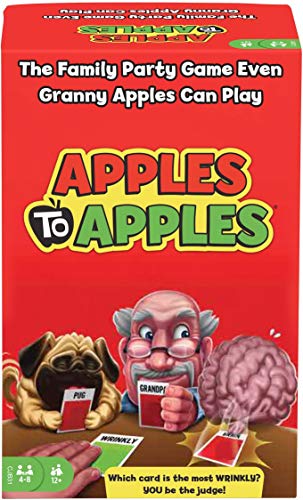 How to Play Apples to Apples

How to Play Cards Against Humanity

The Cards Against Humanity is a hilarious and fun game to play with other adult players. Warning – It’s for ages 17 and up.

The game’s main objective is to pair an answer to a question in the black cards using the cleverest, most hilarious and provocative way you can imagine. Here is how to play the game.

Differences between Apples and Cards

Completion of the phrases in Cards Against Humanity is typically done with words or phrases that may come across as brash or offensive. It is considered the grown-up version of Apples to Apples.

When it comes to the rules of play, Cards Against Humanity gives players much more leeway than Apples to Apples. You can, for instance, trade points for cards if needed.

Apples to Apples vs Cards Against Humanity: Which is the Best?

The game one considers more fun is really a matter of personal preference. However, you need to take the adult content and the environment you are playing into consideration for Cards Against Humanity. For example, Cards Against Humanity would be out of place in a church youth group setting. It probably wouldn’t be in a game night of young professionals in their late 20s and early 30s. Apples to Apples would be more suitable for a family game night.

1. What came first Apples or Cards Against Humanity?

2. Can I play Apples Online?

Apples to Apples is an exciting game that you can now play online. There is a version of the game for Xbox that features single-player and multiplayer modes. However, it is not free and will set you back about $10.

3. What do Apples to Apples Mean?

The phrase, Apples to Apples, means to compare two things that are similar.

Apples to Apples, in the context of the game, means pairing green apples with red apples. The apples are represented by cards with symbolic colors, and the pairing of the cards is dependent on how well the descriptive word on the green ‘apple’ matches the noun on the red one.

Both Apples to Apples and Cards Against Humanity can be the perfect complement for an evening of fun, whether or not the crowd considers itself hardcore gamers. If you need a simple-to-play game that will inject some competition and humor into your family time, Apples to Apples is a great choice. If you’re more interested in a party time game that releases the wild in you, then Cards Against Humanity should be your pick. Explore more card games and other niches to experience the beauty of gaming.