You might wonder why I’m on the hunt for the best 3 player board games. Surely any board game that can have two players or more is fine? Don’t I know that two’s company, three’s a crowd? (Ouch!)

Well, I’m sure there’s plenty of us in the same boat, so let me share: like many of us, I started playing board games with my parents. When I was a teen, my parents started playing Scrabble on the regular. I joined in, and thus formed my first board game group. I wanted to play more than just Scrabble, though, so I began to search for the best board games for 3 players.

Nowadays, I still often find myself playing in a group of three. The friend I regularly play board games with is married, and so our tabletop group consists of me, her, and her hubby. What game did we find to be the best three player board game? Our top pick is an age old classic: Settlers of Catan!

For the uninitiated, Settlers of Catan (or Catan for short) is a resource management game in which players collect resources to build settlements, cities, and roads. Resources are dispensed with the roll of the die, and players may trade with one another to get the resources they need.

What’s so special about playing board games in groups of three? Honestly, there’s some consideration that goes into finding good 3-player board games. Most tabletop games are for groups of two and above, but if you’ve played board games before, you’ll know that a lot of games have an optimal group size.

What are the criteria that make for good 3 player games? There are two questions I ask:

Does the game play smoothly with 3 players?

Some games just don’t translate well when you form odd-numbered groups. For example, a game like Codenames does have a 3-player variant, but after trying it out, I found it awkward – and boring – to play.

Does the game provide sufficient competition?

The 5 Top Rated 3 Player Board Games

Catan is a resource collection and management game. Players place their settlements on hex tiles that are numbered from 2 to 12. Dice are rolled and the resulting number is matched with the appropriate tile, and the resources on said tile are then given to the players.

These resources can be used to build settlements, upgrade to cities, lay down roads, and buy development cards, all with the object of attaining 10 victory points first.

Because of the element of luck in this game, it’s not always possible to have all the resources you need – and in comes in the trading aspect!

As I’d mentioned earlier, Catan is an ideal 3 player board game because you have just enough elbow room – your opponents are close enough to cut off your roads, but far enough that you’re able to expand your domain. Trading can also get boring when there are just two players and way too chaotic when there are four, so a group of three is ideal.

I have a soft spot for Scrabble. However, if I’d wanted to play something similar at a younger age, I think my best bet would’ve been Qwirkle!

Qwirkle is a tile placement game in which tiles are stamped with different shapes in different colors. Players must build lines that consist of either the same shape or the same color.

Lines containing the same shape must be made of different colors, and lines consisting of only one color must be built with different shapes. Points are earned through each line a player is able to create when they position their tiles on the board.

If a player is able to form a line made up of six tiles, that is the ultimate power move – the “qwirkle”, which earns a bonus of 6 points. The player with the most points wins!

Sounds easy, right? Yes, but I assure you that this game is immensely fun for everyone. Kids can play this game while picking up the basics of strategy… by learning how to steal and block their opponents’ moves!

Best Horror Board Game: Betrayal at House on the Hill 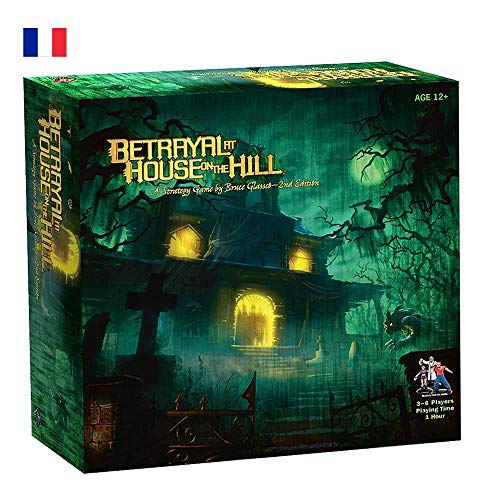 Some people enjoy a good scare, and I’m one of them. I don’t get my fix through movies and books, though – my favorite way to freak myself out is through tabletop RPG’s, and Betrayal at House on the Hill really scratches that itch.

Betrayal at House on the Hill is a game where players explore an expansive haunted house. Players must take on the roles of pre-generated characters and must move together through the fog of war to uncover new areas in the mansion. As players explore, they must draw tiles at random to build new sections of the mansion.

The Haunt phase begins with an unlucky roll of the die, and suddenly one player will be chosen at random to be the traitor. The game is then abruptly plunged into a nightmarish race against the sudden villain!

“Elementary, my dear Watson.” Imagine being brilliant enough to say that to a decorated soldier and medical doctor! Many of us have put ourselves in Sherlock Holmes’ shoes, thinking that perhaps we could be as sharp as he is. Well, if you’ve ever wanted to try your hand at playing detective, then Sherlock Holmes Consulting Detective is perfect for you.

Sherlock Holmes Consulting Detective was first published in 1981 and continues to mystify players to this day. Along with the cases, you’ve given a map of London, the equivalent of an old-timey phone book, newspapers published around the time of the crime, and a clue booklet describing what can be found at the locations you choose to visit.

Putting all of this information together, your aim is to score higher than the esteemed Detective Holmes. Once you’re satisfied with all the clues you’ve gathered, you can pick up the quiz booklet and answer the questions posited therein. You can then check your answers and tally your score accordingly.

If you’ve ever wanted to see how astute you are, give this game a try – you’ll be sure to spend hours poring over every single detail, trying to see if it all adds up!

In Pandemic, you and your party members take on the role of CDC specialists who are caught in a heart-stopping race to halt the spread of four diseases. Each member of the group has unique abilities and everyone must work together to try and determine the best course of action per turn. In one turn, players may travel, share location cards, treat patients, build research facilities, and finally, discover the cure. However, it’s not that simple; the disease is active too, and it spreads and grows more virulent with each turn as well!

Nowadays, people are more and more aware of the hardships that workers in the medical industry face. They are our literal superheroes, risking their lives on the front lines.

So let’s salute our medical industry heroes, and those of us who aren’t in the medical field can at least catch a small glimpse of what it’s like to flatten the curve – one turn at a time.

Why You Should Buy 3 Player Board Games

Important Features to Consider for 3 Player Board Games

Aside from the criteria I mentioned above, there are a couple of other things I like to consider:

For Settlers of Catan Board Game:

Q: We’d like to play this with our kid. Is this game suitable for children?

A: For younger children, the game may be too complex or too dull for them. Catan Junior is a better option for young children since it simplifies the rules and uses a smaller game board.

Q: Is this similar to dominoes?

A: Yes, it’s a matching game. However, playstyle and scoring are more similar to Scrabble.

For Betrayal at House on the Hill Board Game:

Q: How long does gameplay usually take with 3 players?

A: Depending on when the Haunt is triggered, it takes roughly 50 minutes to 2 hours.

Q: Since this game is very dependent on understanding the language, does it have translations?

For Pandemic Board Game:

Q: Why can’t we win? The game is too difficult!

You can always try playing the game in Easy Mode (with less epidemic cards). However, the game is designed to be challenging, as eradicating a disease is not easy at all!

Additional 3 Player Board Games to Consider

Looking for more options? Here are some more of the best 3 player board games:

Azul is a visually stunning game in which players collect decorative tiles and lay them out according to patterns on their boards. 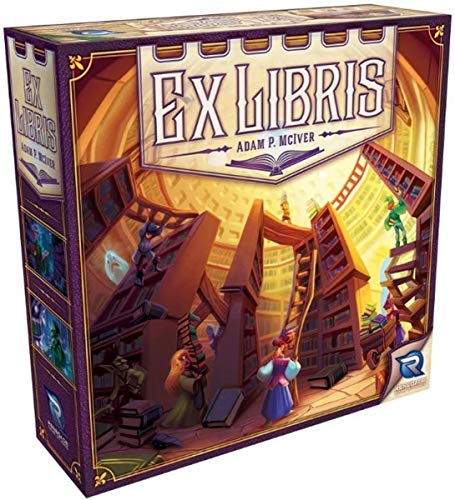 Ex Libris is a worker placement and set collection game where players deploy staff members to help them build a beautiful and well-stocked library. 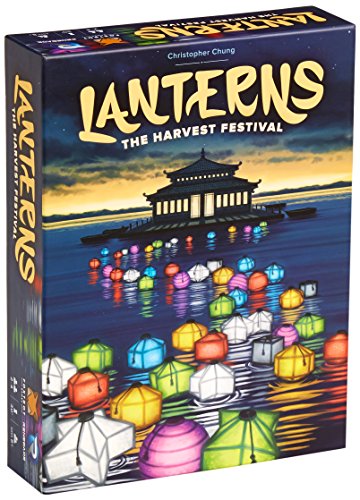 In this game, players strive to become the most honored artisan by dedicating their lanterns to the festival.

Tsuro – The Game of The Path 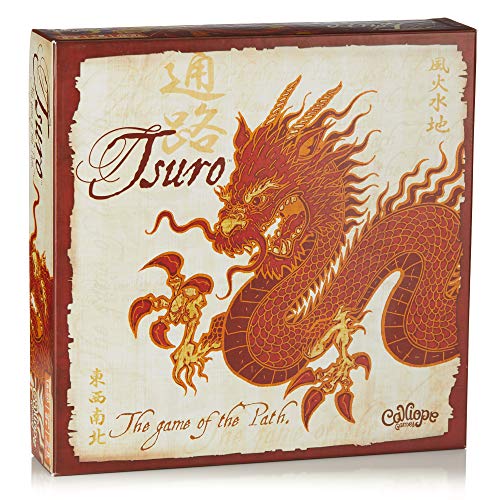 Allow your dragon to soar freely across the sky in this fun and easy tile placement game. Careful not to bump into your fellow dragons! 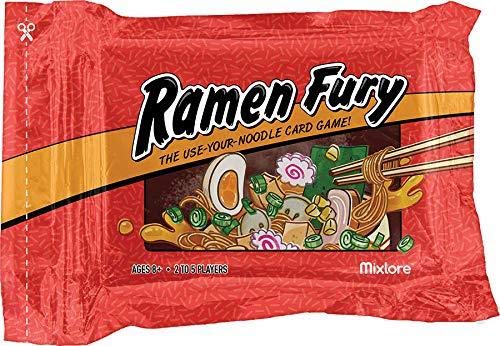 Fancy a bowl of delicious ramen? Order your ideal ramen by creating sets of ingredients and toppings in Ramen Fury! 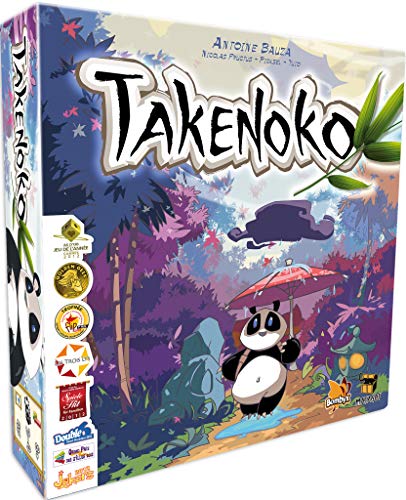 Become an imperial bamboo gardener in Takenoko! Players need to meet objectives assigned to them at random, including growing different species of bamboo and feeding a hungry panda!

Link destination cities across North America and build the longest trains in Ticket to Ride! It’s similar to Catan which makes it’s easy to learn. 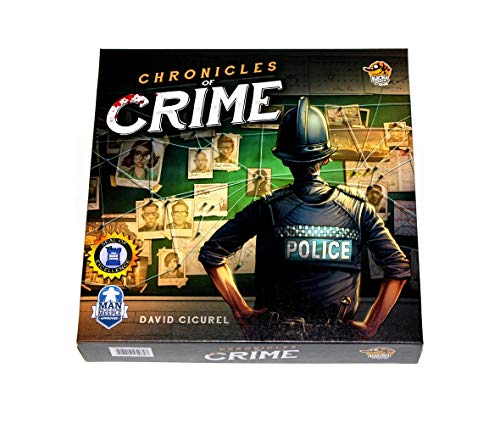 Chronicles of Crime is a high-tech adventure that utilizes a physical board game, a mobile app, and even VR! Players take on the role of sleuths in modern day London, solving cases given to them by the chief of police. 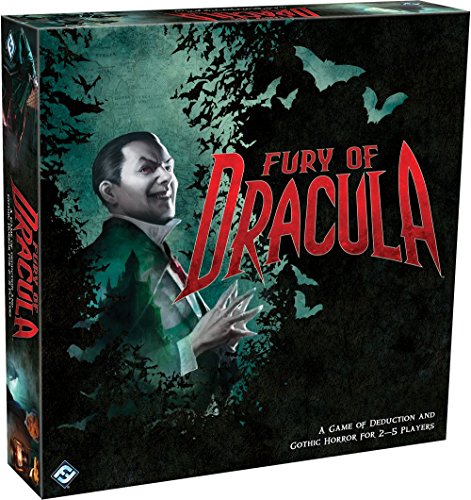 Fury of Dracula is a deduction game that pits our heroes against the titular villain,Count Dracula. Players must move across Europe to deduce Dracula’s secret location, all while evading his powerful minions. 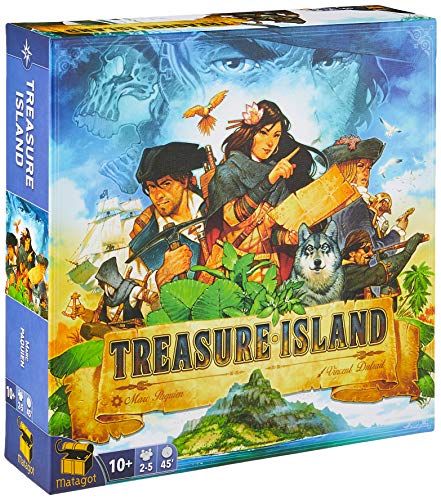 Yarr! Ready to find that booty? In Treasure Island, players must search for Long John Silver’s buried treasure. Hurry, though – don’t let him get away! 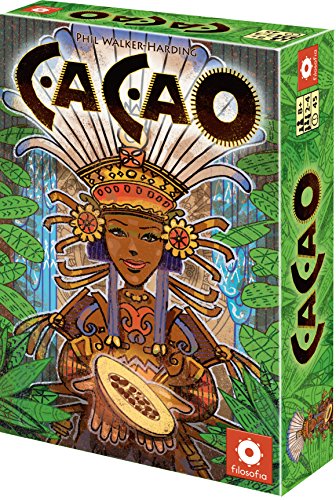 Cacao is an economic game that allows players to grow and sell cocoa beans (once called “the fruit of the gods”).

Splendor offers players the chance to become affluent jewel merchants. In this game, players must collect gems and shop improvements, all with the goal of attaining the most prestige. 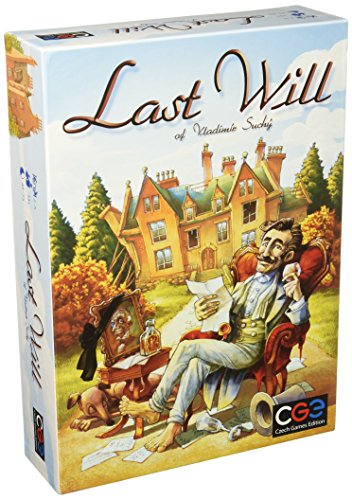 In this unique economic game, the winner is… the person with the least amount of money? Players of Last Will play as nieces and nephews of a recently deceased uncle whose last will dictates that whoever lives the most frivolous lifestyle inherits his moolah.

Quacks of Quedlinburg Board Game 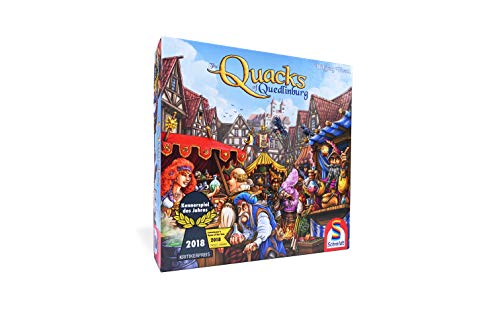 Try your hand at brewing potions in Quacks of Quedlinburg, where players compete to be most successful chemist, or “quack”. Careful, though – make sure your cauldron doesn’t explode!

Escape The Curse of the Temple 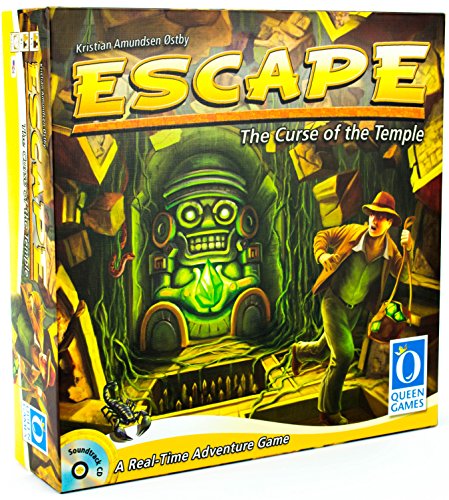 Escape: The Curse of the Temple gives players 10 measly minutes to break out of an ancient temple, where they can unearth treasure, run into traps, or worse – get stuck. Check out our full review here.

Forbidden Island is a cooperative board game where players embark on a frantic race to retrieve precious artifacts before the island sinks.

In Harry Potter: Hogwarts Battle, players take on the roles of the golden trio as they fight against evil! 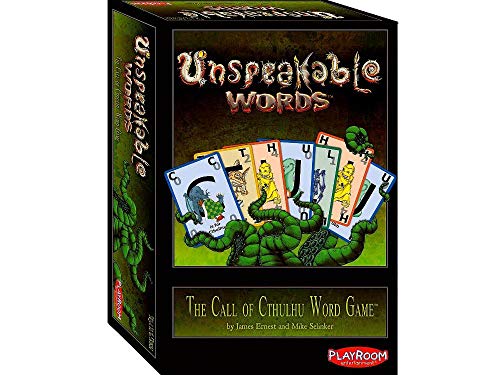 Who knew that words would be enough to drive someone insane? Question is: in Unspeakable Words,is that a good or a bad thing?

In Bananagrams, players race to create a word grid without any mistakes. The winner is then crowned the top banana!