Rick and Morty is an incredibly popular TV show that is raunchy and hilarious. Chances are you are looking for the best Rick and Morty board game because you are a fan of the show.

We took the time to put together a list of the 10 best Rick and Morty board games for 2021. To figure out what the best games are, we looked over several customer reviews and sales data on the games purchased.

There are so many Rick and Morty games out there for purchase, so take a look at our top 10. We determined these games by looking at customer satisfaction ratings and purchase data. Keep reading to figure out what the 10 best Rick and Morty board games are! 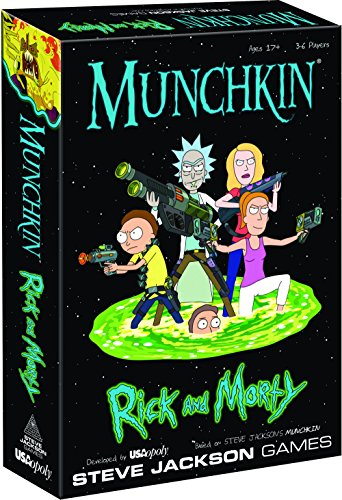 This game features 168 cards that feature characters of the TV show. This is a fast-paced party game that is based on the popular role-playing game Munchkin. You get to play as Rick, Morty, Summer, Jerry, Beth, and even Mr. Poopybutthole to beat your opponents.

You can play with 3 to 6 players, as long as they are older than the recommended age of 10. You can expect one game to last a minimum of one hour, so make sure you have plenty of time to play. 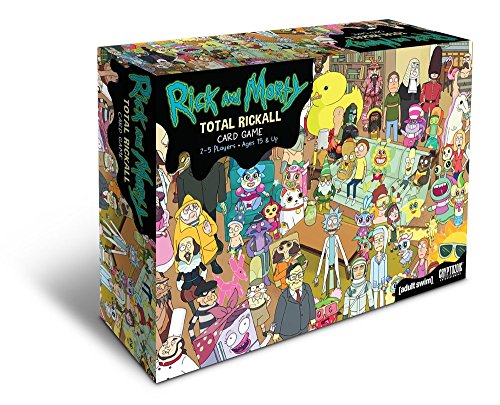 This Rick and Morty game is based on the episode called Total Rickall, but you can play even if you haven’t seen the episode. The game consists of what are called Parasites who are pretending to be members of the family, as well as close friends.

You need to work as a team to determine if new characters introduced are real or if they are a Parasite so they can be exterminated and the world will be saved. There is also an advanced mode that allows players can take on the role of either Real characters or Parasite characters. 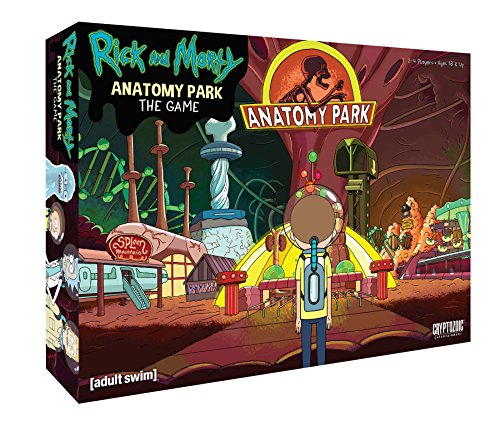 Anatomy Park is another game based on an episode of the TV show. It is a competitive, strategic game that consists of placing tiles to design a park inside the body of Ruben (homeless department store Santa).

The goal is to get the best spots and move around some organs in a way that best suits the needs of your park. However, Ruben is definitely not a stable host for your park and time can run out quickly. 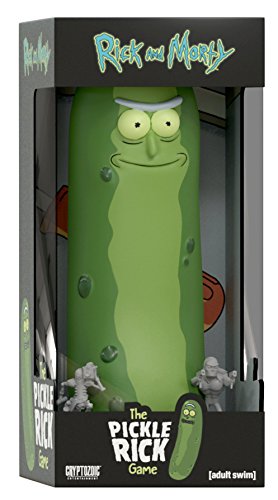 Pickle Rick is probably one of the most popular episodes of Rick and Morty, so it’s only right for there to be a Pickle Rick game to go along with it. One player will be Pickle Rick and try to escape from an armed compound. The second player will take on two roles – the Russians and Jaguar – to stop Pickle Rick from getting away.

The player who is Pickle Rick will use weapon cards to damage the other player, and will use air vents to escape to the roof. You will get Pickle Rick and Jaguar mini figurines that you use to move across the board of tiles. These tiles are constantly being flipped, rotated, and added.

Our favorite part about this game is the packaging. It is in the shape of a pickle, which is just hilarious. You can display this casing when you aren’t playing the game.

5. Rick & Morty Photo Expansion Pack by What Do You Meme? 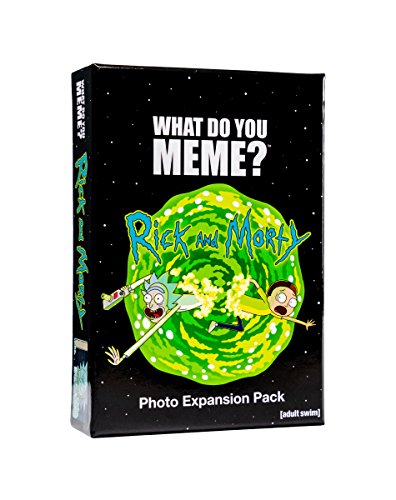 This game is intended to be an add-on to the popular card game What Do You Meme. You will not be able to play this game without the original game. You use the cards to compete against your friends and family to put down the funniest meme possible.

Each round a photo card will be laid down by a judge for each player to see. You then look through your dealt cards to pick the funniest caption for that picture. This expansion pack includes 75 Rick and Morty themed photo cards that can be added to your original game. 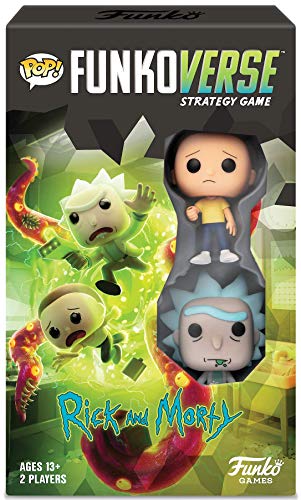 This is a strategy board game that brings together the worlds, stories, and characters from the TV show into your home. You can play this game by itself or mix it together with other Funkoverse games. You will find 2 playable maps – The Smith House and Blips and Chitz.

You will be able to move through these two locations while using the abilities of your character to collect points and win the game. There are also two exclusive Funkoverse Pop! Character figures of Rick and Morty. 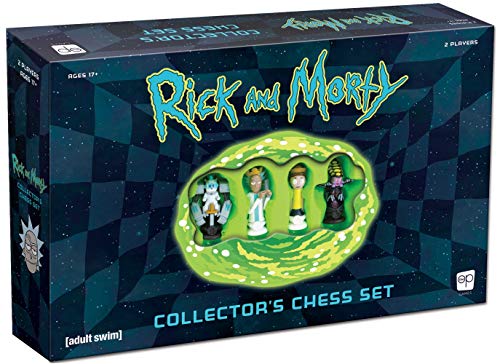 This collectible chess set features completely custom sculpted pieces of Rick and Morty characters. There are a total of 32 custom pieces – the Good Side and the Evil Side – 1 game board, 1 mover reference sheet, and game rules.

There are Good Side characters that include Rick, Morty, Beth and Summer, Birdperson and Snuffles, Jerry and Squanchy, and Mr. Meeseeks. The Evil Side includes Evil Rick and Evil Morty, Post-Apocalyptic Summer and Beth Mytholog, Phoenixperson and Snowball, Jerry Mytholog and Gearhead, and Distressed Meeseeks.

8. Rick and Morty Version of Risk 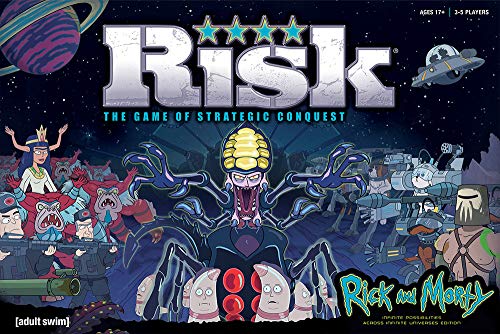 This game offers a fun twist to the classic strategic board game Risk. There are five factions that are power driven including Robot Dogs, Mythologs, Post-Apocalyptic People, Gazorpians, and the United States Government. When you are a faction leader, you can grant power in your territory. 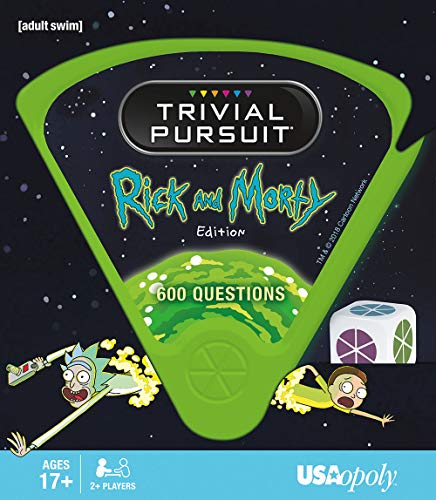 This game allows you to test out your knowledge of the TV show Rick and Morty. You get the ability to look back on some of the most iconic moments of the TV series with 600 questions about the show.

Included in this game are 100 question cards with 6 questions on each, a die to roll, and rules. You need at least two players for this game and a minimum of 30 minutes. 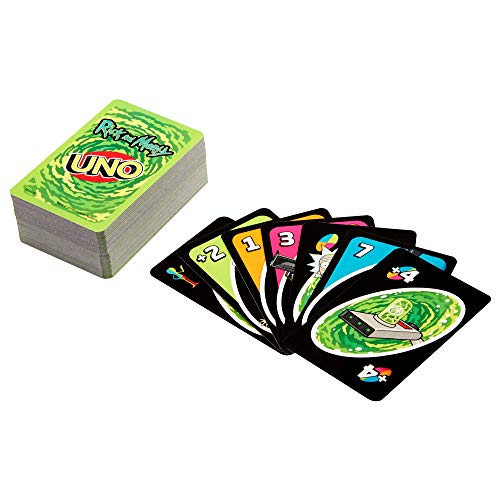 The classic Uno game with a new theme of Rick and Morty. Each card has a unique graphic of the TV show characters. Just like the original game, you match cards by color and/or number to be the first one to empty your hand of cards.

Unlike the original Uno, there is a “Mr. Meeseeks Rule”. This rule allows you to look through the discard pile for a card that will be useful to you. This rule is exclusive to this deck and is not to be played with other Uno versions.

There are 112 unique cards included with this deck, as well as instructions on how to play the game if you aren’t familiar with it. Just don’t forget, when you are down to just one card you need to shout UNO for your win to count!

If you are a fan of the TV show Rick and Morty, there are several games out there that can bring these characters into your home for an entertaining game night. Most of the Rick and Morty board games listed above are not suitable for children, and the recommended age is 17 for the majority of them.