A few weeks ago, my friends and I had the privilege of playing the Love Letter card game at a local Mediterranean restaurant named Phara’s. It was great sitting out on their patio in the cool breeze of the evening. We enjoyed some creamy Hummus with roasted Pine Nuts, Tzatziki (a thick and creamy greek yogurt), and some fresh Pita bread while we broke out our first game of the evening, Love Letter – Legend of the Five Rings.

In Love Letter, 2-4 Samurai are trying to win the heart of the young princess. A personal meeting is impossible so you are forced to write letters to hopefully win her love before another rival clan’s samurai tries to steal her from you. Your goal is to win over the princess by using an intermediary to deliver your love letter. If your intermediary survives and makes it to the princess, you win the round. 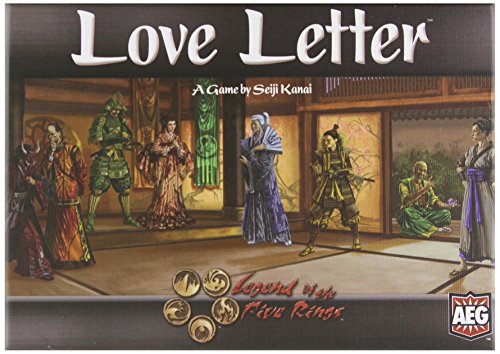 How to Play Love Letter in 10 Simple Steps

Our Impression of Love Letter

This game is very simple and everyone we played with really enjoyed it. Each round lasted about 5 minutes, so the whole game was over in about half an hour. It’s a very small card game so it’s perfect to pull out during your lunch break with a couple of co-workers or to start off your evening of tabletop games. Also, the edition we played had very detailed Japanese artwork which looked really great, but may not be appealing to every gamer. There are several versions of Love letter, so don’t let the artwork keep you from purchasing this great game.

Love Letter is a casual game, but it has several moments to steal someone’s win out from underneath them. This is great for people who like to try and keep track of what cards have been played and anticipate what others will do next. It played really well with four players, but I would also recommend it as a great two player game.

When you sit down with your friends, I highly recommend keeping in line with the theme by ordering yourself some Sushi or pot stickers (AMAZING). If you are feeling adventurous, find a bottle of sake and settle in for a fun night with friends!

Finally, let us know what your thoughts are of Love Letter. What else did you enjoy about this fine card game?