Eagles of the Empires Spanish Eagles

The Eagles of the Empire system goes to Spain using the new 3.0 rules! Featuring two battles, Talavera and Albuera, from Napoleon’s 6-year campaign on the peninsula. Both were bloody engagements, bitterly fought, and saw men of all ranks rise to great deeds on both sides.

Spanish Eagles showcase two of the most notable battles from Napoleonâ€™s war in Spain; Talavera, fought in July of 1809, and Albuera, fought in May of 1811. Both battles promised decisive outcomes and were among the largest fought on the Iberian Peninsula. Both battles feature an alternate scenario so players can explore the outcomes given some twists in fate. The Eagles of the Empire Series is a Divisional level series of games based on the battles which took place during the 18th and 19th centuries, in which players are cast in the role of Field Commander. The series is built upon three key concepts: Command and Control; effects of terrain upon formations and maneuver; and other asymmetrical events outside a commanderâ€™s control. Understanding and maximizing the use of these concepts is the key to fighting the Eaglesâ€™ battles.

Spanish Eagles has been named as a finalist for the 2009 International Gamers Award!

The International Gamers Awards were founded in 1999 for the express purpose of recognizing outstanding games, their designers, and the companies which publish them. The awards have gained widespread acclaim and have helped bring these outstanding games to the publicâ€™s attention. 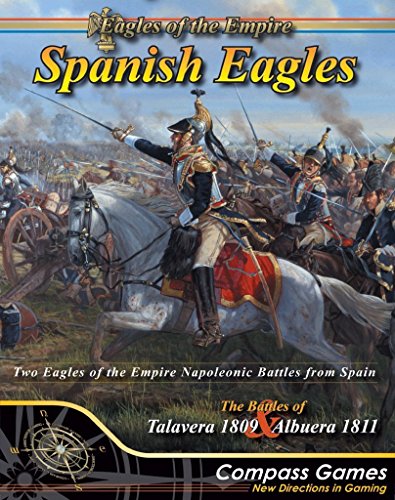 COMPASS: Spanish Eagles, the Battles of Talavera 1809 & Albuera 1811, Board Game in the Eagles of Empire Game series

Eagles of the Empires Spanish Eagles
Company Info
Compare Prices by Category
Sign Up for the Newsletter
Get the latest offers and news on your favorite board games.