For a lot of games, 3-4 players is about the sweet spot — and also the limit. Last week we talked about the  best 2 player board games. But what do you do when you’ve got a bigger group coming over for game night? Try breaking out one of these great 5 player board games.

I’ve talked before about how much I love Bang! from daVinci games, and its sibling game, Samurai Sword (check out our review here). Both of these card games are great for 5 players and they allow for up to 7 players, though the Dodge City expansion for the original allows you to expand to 8 players.

The original game is a Spaghetti Western, where players are either the Sheriff, a Deputy, an Outlaw, or the Renegade, and how you win depends on your role. The Outlaws try to kill the Sheriff, Deputies try to keep the Sheriff alive, and the Renegade wants to be the last one standing. 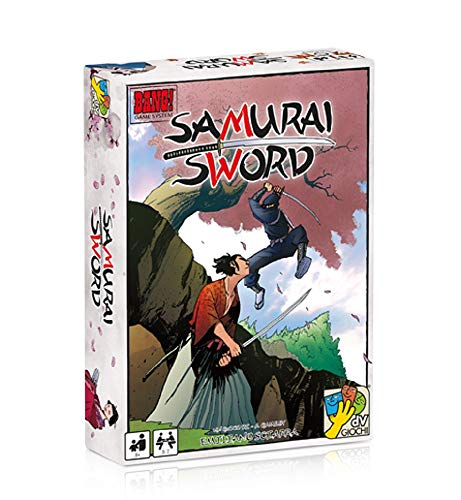 
As the name implies, Samurai Sword has a Japanese twist — players are either the Shogun, Samurai sworn to protect the Shogun, Ninjas bent on eliminating the Shogun, or the solitary Ronin. Each player gets to take on a role in the wild west upon receiving a Character card and Role card to determine their special abilities and goal respectively. Four different roles are available but their goal isn’t linear. Is your opponent bluffing or showing the real deal? Your Role is kept secret except for the Sheriff.

Apart from a few gameplay refinements, the most noticeable difference is that Samurai Sword does away with player elimination, which means the games go a bit quicker. Depending on who you play with, this could be a good or bad thing, but you really can’t go wrong with either option here. BANG! has received awards through the years, making it an exemplary first choice for 5 player games.

Again, 7 Wonders is something of a personal favorite. It’s a card-passing game for up to 7 players, and each player has to build one of the 7 Wonders of the classical world (hence the name). Finally, A multiplayer board game that won’t take you 4 hours to play!

The gameplay is fast (as long as the players can decide quickly), with each player collecting a certain number of cards in each “age” (round).
Some cards have immediate effects, some are great for late-game strategies. Every card is played immediately after being drafted, so you know which cards your opponents are getting and how he acts on it will affect what you already have. You pass cards left-right-left throughout the game’s three ages, so you have to be on the lookout from both directions!

Like a lot of other Euro-style games, the winner is the one with the most Victory points, amassed by collecting resources, gold, and cards. You’ll find yourself wanting to play again with its distinct game mechanics. The rules are quite easy to learn, which helped make it an instant favorite.

If you’re all about strategic work-placement games, this farming game is perfect for you. Caverna: The Cave Farmers is a game similar to its sibling Agricola, good for up to 7 players. You start the game as head of a dwarf family living in a small cave in the woods, along with a spouse.

It’s a complete redesign of Agricola letting you buy weapons and deploy your farmers to go on quests. Most players say it’s an “easier” version of Agricola. Still, you have to make vital decisions on building out your caves and farmland, breeding animals, or growing food. What makes it great is the diverse developmental paths.

Caverna has a playing time of at least 30 minutes per player. There are 48 furnishing tiles you have to familiarize yourself with, and you control how much ore you want to mine. Throughout the game, you develop your home board by choosing to mine the mountain for ore and rubies, plant more trees or fence in pastures, or expanding your little family. It provides heavy strategy and tactics gameplay for a couple of hours.

As you might guess from the name, Citadels is a card game all about building your own city. The first player to 8 buildings ends the game, but the player with the most points wins. In the meantime, you’ll have to outmaneuver your opponents and scheme to eliminate other players for the round to keep your edge.

Don’t let the game’s simplicity fool you. You’d be surprised to know that it offers a colossal amount of cognitive gameplay and strategy. There’s good balance, bluffing, replayability, and randomness. Even though there is randomness in it, the game has a good handle over it.

The game changes based on how many players there are. For instance, at a 4-player game, 2 extra characters are out each round, in contrast to a 6-player game. Plus, 9 extra cards are included, letting each game be unique as the powers available are in constant flux. Lastly, the dynamics of the game are easily changed by adding in new characters.

Having said that, it’s still a game that remains light enough to be enjoyed by several players. On its own, the base game supports up to 7 players, but with the Dark City expansion, you can play 8 people.

The Resistance is all about bluffing and outwitting your fellow players. It plays best with 5 players, but it allows up to 10 total. The Resistance requires everyone to work together to take down the Empire. However, Imperial spies have infiltrated the ranks of the resistance, attempting to bring it down from the inside. Players are assigned missions and then collectively vote on whether to carry them out. Then, players secretly decide whether to help the mission succeed, or sabotage it.

In the first round, you and 4 to 9 other players have no idea what is happening apart from the spies. This lack of information compels you to decide carefully about the first few missions almost at random just to get information.

Sooner or later, you or your opponents will accuse each other of being spies from first impressions – being too silent or too loud, giving the stink eye, hesitation to respond, and more. The more information you get, the easier it gets to uncover the spies. However, it’s not done without fault. Allied resistance members may find it hard to trust each other again throughout the game.

For an idea of how the game plays and no shortage of hilarity, check out Wil Wheaton, Felicia Day, Allison Scagliotti, Ashley Clements, and Amy Okuda play The Resistance on Tabletop:

And don’t forget the variations of The Resistance, either: The Resistance: Avalon (with an Arthurian twist), Coup, Coup: Reformation, and others.

Munchkin is something of a gateway game, and with good reason. It’s great for 3-8 players, there are frankly an astounding number of variations and expansions, and you can mix and match decks to your heart’s content (especially if you have the Munchkin Blender pack. It’s easy to pick up, too.

The expansions you have determine how long you play. The base game alone takes 1 to 2 hours. A game with 5 players and several expansions may take a lot longer than that. But if you or one of your friends gets really, really luck, it can be over real quick, but that’s highly unlikely.

Munchkins has strange game mechanics but the strangest one has to be needing help from other players. You’ll need the assistance of fellow players to defeat monsters early in the game. But as the game progresses, you’ll be doing the exact opposite! It will be an ongoing debate within to try to get help but at the same time, you don’t want to give more than you intend. Indeed an exciting 5 player board game that will win your heart.

In a lot of ways, Munchkin is like a card-based version of Dungeons and Dragons: you’re raiding a dungeon, looting rooms, and leveling up, all while facing down monsters with your friends and then stabbing them in the back.

Tsuro is another fast-playing game for 2-8 players. The premise is pretty simple: Keep your dragon on the board. The tricky part is avoiding other players, because you’re out when your path leads you to the edge of the board or your path intersects with someone else’s.

Apart from its beautifully crafted board and pieces, players are drawn to this game because it’s incredibly easy to learn. It’s also a fantastic game for children. The dragon pieces and clean paths make it possible to be played by younger kids and non-gamers. Although the game is quite simple in nature, it’s a great coffee shop style board game. You can play it anytime, anywhere. It’s light but very enjoyable.

And of course, we can’t overlook  Settlers of Catan (with the expansions it can play up to 6 people), and the ever-popular Cards Against Humanity, which can play as many people as your deck, and your living space, can support.

What are your favorite 5 player board games? Have you hacked any games to allow more players, and how?

Top 14 Spooky Board Games for Halloween

25 Essential Board Games for Tabletop Beginners

We will be happy to hear your thoughts

25 Essential Board Games for Tabletop Beginners

Game Night Guides 0
Categories
Affiliate Disclosure
Dicey Goblin is a participant in the Amazon Services LLC Associates Program, an affiliate advertising program designed to provide a means for sites to earn advertising fees by advertising and linking to Amazon.com. We also participates in other affiliate marketing programs. We may get paid a commission if you buy something or take action after clicking a link.
Company Info
Compare Prices by Category
Sign Up for the Newsletter
Get the latest offers and news on your favorite board games.