Zombie Fluxx takes the original game experience and adds an undead twist. On top of the usual ever-changing game rules and winning conditions of Fluxx, the players are now faced with a full-blown zombie epidemic. There is a whole new array of foes to deal with. 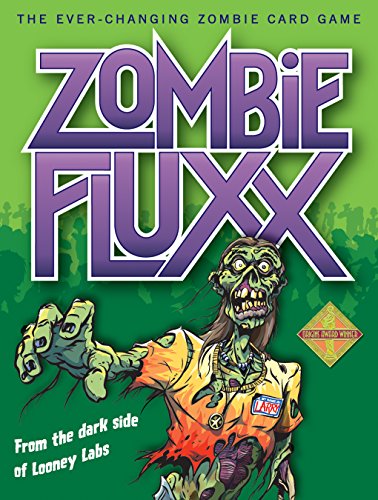 Zombie Fluxx is similar to other versions of Fluxx because the central mechanic of “evolving rules” still applies. It adds a heavy dose of living-dead flavor by adding undead-theme cards as well as new rule based cards such as “Ungoals”. If it’s played, it sparks a zombie apocolypse causing a loss to all players and creepers.

This is a Fluxx variant for anyone who enjoys tongue-in-cheek, parody games like Munchkin or fans of the zombie horror genre looking for a light-hearted, undead romp.

The gameplay of Zombie Fluxx closely resembles that of the original Fluxx. Players take turns drawing and playing cards, trying to meet the conditions laid out by Goal cards in order to win the game.

As the game progresses, players activate new rules dictating how many cards are drawn and played, the number of cards allowed in hand, and even what a player needs to do to win the game.

Zombie Fluxx adds several new ingredients to this recipe, giving players the added goal of preventing a zombie apocalypse, making players avoid or do away with the zombies they encounter, and even providing new ways to win the game such as by forming a zombie baseball team (achieved by collecting nine zombies and a baseball bat) or by becoming the Zombie Boss and spearheading the undead renaissance.

As a side note, this version contains all of the rules and cards needed to play a game of basic Fluxx. So, if you are new to Fluxx don’t be afraid to pick up this version since you can begin with the basic game and graduate to battling the undead hordes when you are ready later.

Who Should Play Zombie Fluxx

Like all games, Zombie Fluxx has a target audience. I recommend this game for fans of the zombie horror genre looking for some comic relief. Gamers who enjoy parody games or people who love a bit of chaos will also enjoy this version of Fluxx.

If you are a gamer who is highly competitive, this may not be the game for you. It can be frustrating due to the lack of control that you have on the outcome of the game.

This doesn’t mean competitive gamers won’t have fun, but they should expect Zombie Fluxx to be more casual. If you have trouble toning down your competitive side, a few beers always help.

So, the next time you watch a Walking Dead marathon with friends, try out Zombie Fluxx to change things up. It’s also a very small board game so it’s easy to bring it along if you are traveling.