The purpose of Machi Koro is to develop your city before your competitors. The first contractor to build their 4 major developments wins! I mean, how much easier does it get?! 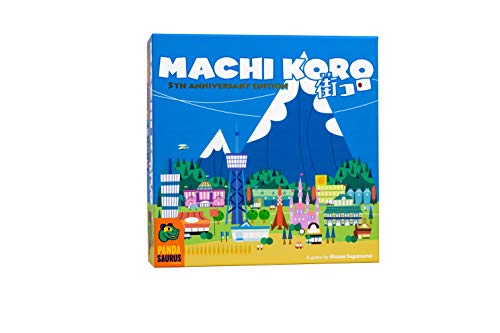 This game is definitely not cooperative. It is every contractor, player, for themselves. You start off with a few properties that will earn you some money with a roll of the die, however, you quickly learn that you have to build more properties in order to thrive in Machi Koro.

You are able to adapt the rules fairly easily without changing the overall objective/play-time of the game. I think that this is a great quality because sometimes you just need to spice the game up a little bit.

The recommended players for Machi Koro is the standard 2-4 players. While play with 2 would increase the speed of the game, adding 3 or 4 ups the ante on strategy. More players allows you to make alliances/gang up on certain players! You could potentially increase the amount of players by having a partner, however, who really wants to run their city building plans by someone else?! I personally recommend 3-4 players.

On a scale of 1 to 10 in difficulty, Machi Koro would be a 1, VERY EASY. We sat down to learn this game at 11:30 at night after having played other games. I was a little worried that my sleepy/pregnant brain wouldn’t be able to keep up but I was mistaken! Not only are the rules easy to decipher (there are beautiful pictures) but also the game is incredibly easy to explain. No worries here on explaining the game to get the party started!

Machi Koro is quick game can be played with 3 players in roughly 30 minutes. The rounds did not take long at all. Most of us knew what we wanted to do and executed fairly quickly. The longest part was trying to remember all my cards so that I could cash in when someone rolled the dice.

Talk about beautiful and fun artwork! The cards were very pleasing to the eye! It was also easy to distinguish between all the different colors—very important. And, the words were fairly easy to read on the bottom of the cards. One downfall was the money. The coins were a little on the cheap side… maybe the city is trying to cut costs since they are just starting out with a wheat field and bakery?!

Play with ‘That Guy’

I really believe that Machi Koro is great for the whole family! It had a Monopoly feel without the 10 hour time commitment needed to play! Machi Koro would work not only for family game night (kids vs. parents) but also for just your regular friend get together.

Machi Koro doesn’t necessarily have any over the top preparations that need to take place. Since the game plays so quickly I think simply snacks and good conversation are enough. You could always play during Shark Tank in order to channel your inner Mark Cuban or Mr. Wonderful! Or, you could up the ante and have to drink on a predetermined role of the dice.

Remember to sign up for the We the Meeple newsletter at the top of the page to receive news on upcoming board games and discounts.