In Lewis & Clark: The Expedition, players assume the role of famous explorers. They are attempting to follow in the steps of the original historical Corps of Discovery who made the well known trip on the Mississippi river. Players have to make difficult choices involving which resources to invest in, how to manage their expedition crew, and carefully choosing how to spend their time. A board game with exquisite art and wonderful mechanics, Lewis & Clark the expedition is a complex and satisfying game. 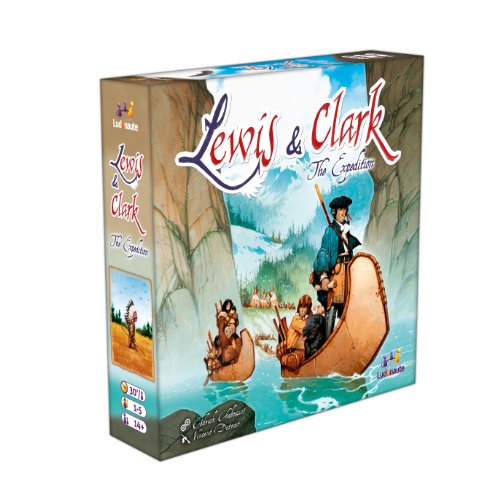 Lewis & Clark is designed for up to five players and it can even be played by yourself. It’s fun to play to solo, but the game mechanics are best with at least two players.

This is not a simple game. While Lewis & Clark can be learned and taught in the better part of 15 minutes, it really requires several play-throughs to understand how to fully exploit the games interesting dynamics. Have your friends prepared to invest some time to get past the game’s somewhat challenging learning curve. Once learned the re-playability options within the game makes it all very worthwhile and fun.

A keen rule of thumb is ~30 minutes per player. Since this game can make room for up to 5 players, it can become quite long. You should expect your first round to take longer if you are playing with new players.

This game’s art is a shining example of what is truly possible in the board game medium. The cards of the game include a diverse cast of historical explorers and Indians with different strengths. The colors and artwork make strategy planning exciting as you embark on your very own expedition.

It’s best to play Lewis & Clark with the someone that considers themselves a connoisseur or aficionado of board games. It’s a very in-depth and dense board game so expect it to be challenging. People who enjoy Monopoly will love this game! I don’t recommend drinking and you should probably play after dinner. You want to be ready to accept the challenge and think up new strategies to beat your fellow opponents!