Today, we bring a new card game by the name of Pairs by Cheapass Games. I had followed this card game on Kickstarter for a while, but I failed to make my donation in time due to an unexpected weekend trip. Thankfully, my wife and I had the pleasure of meeting James Ernest, the creator, at the GAMA Trade Show. We caught him just before heading out and he gave us a demo copy. Thanks again James! 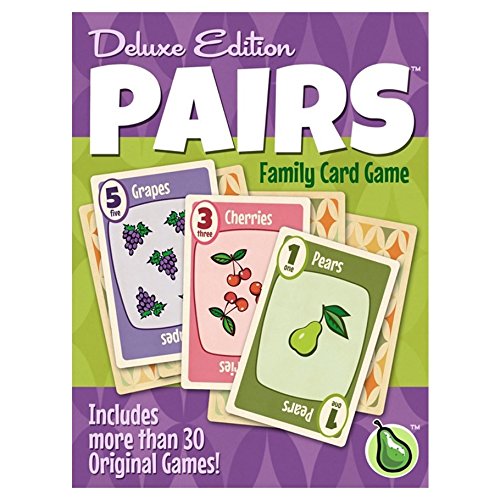 Pairs funded in March with over seven thousand backers and it also exceeded $300,000 in funding. This simple to learn and unique game shattered its goal of only $12,000. Once you get the opportunity to play, you will quickly learn why.

Pairs allows for two to eight players and you start off by burning the first five cards and dealing one card to each player. The objective for each player is to avoid getting points and the first person to reach the target score “busts” and loses (this makes it a great pub game). The lowest card goes first and that player has two options.

He can either take a card (risking the possibility of getting a pair) or fold and take the lowest value card that is on the table. If you get a pair, you get points equal to the value of the card (i.e. If you have two eights, you get eight points).  Typically at the beginning of the game you want to take a card because you have a small chance of getting a pair in the first hand; but as the game progresses, your chances increase. The round ends when one player either gets a pair or folds. You then discard the used cards and deal again.

When it comes to the artwork, each number has it’s own unique face. If you were part of the crowd that supported Pairs on Kickstarter, you had the opportunity to get several different themed decks. The themes range from pictures of Fruits to even Pirates (my personal favorite!). We currently own the fruit deck and the colors really stand out which is great for a card based game.

When it comes to the game mechanics, the level of strategy is not too complicated. Anyone can learn this game very quickly; but if you have a talent for memorization, it really pays off when you get towards the end of the deck. Each time we have taught this game to friends, they enjoyed playing for about twenty to thirty minutes. We have yet to incorporate drinking or penalties for the loser, so we think it will be a hit with at least four players when that happens.

In summary, this is a must have in your collection. It is the perfect game for right after playing a strategy based board game and you need to boost people’s excitement to keep the night going.